Unless a Seed Die: On Hope in Dark Times

Remembering the Witness of the Four Church Women in El Salvador

by Scott Wright and Jean Stokan 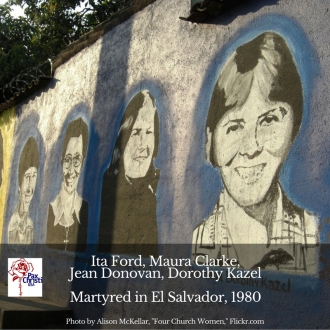 Today, 36 years later, more refugees are crossing borders and fleeing violence than since the end of the Second World War. Hundreds of thousands of Syrians and Iraqis are trapped in their homes, under siege in Aleppo and Mosul, and millions more are fleeing to distant lands seeking refuge. They risk their lives on sea and on land, and have been greeted with both generosity and with hatred.

The same fears and threats hurled at Jewish refugees seeking to escape Nazi extermination camps 75 years ago is being hurled at Muslim immigrants and refugees today, in both Europe and the United States.

Whether the new administration welcomes immigrants and refugees will determine in no small measure whether the United States lives up to its heritage as a nation of immigrants and a refuge for “the tired, the poor, the huddled masses” of the world “yearning to breathe free.”

Today, 36 years later, we live in a very different world, where the cry of the earth and the cry of the poor are joined together. One year ago, 200 nations, including the United States, gathered in Paris to sign a binding agreement addressing the urgent concerns of global warming and climate justice. Global warming is creating extreme weather events, severe droughts and flooding, rising sea levels and melting glaciers, and disrupting access to food and water for millions of people.

Whether the new administration honors the Paris agreement or not and takes steps to move away from a global economy based on fossil fuels towards a more sustainable one will determine in no small measure the future of the planet.

The challenges we face today are different from the challenges faced by the four church women 36 years ago. They call for new perspectives and new structures, new visions and new social movements to adequately respond to the needs of present and future generations for justice and for human dignity, for peace and for the planet, especially in light of the recent presidential election.

But today, December 2, we remember in a special way the four church women, and ask, “What would they be doing today, if they were living in our times?” And what ought we to be doing? What insights do their courage give us regarding how we ought to respond today to a myriad of challenges?

It has been 36 years since the four church women were killed. They chose to live in the midst of war and cry out for an end to violence; they saw the victims of torture and cried out for an end to torture; they offered food, shelter and medicines to the families displaced by the war and offered refuge, risking their own lives; they took sides with the poor and cried out for justice. In a word, in life and in death, they shared the same fate as the poor. They were prophets of a future not their own. They were seeds that fell to earth and died, only to bear fruit in others.

If they were living today, we are certain that they would be found advocating on behalf migrants and refugees, offering hospitality to women and unaccompanied minors at the border, visiting immigration detention centers and questioning a broken immigration and refugee system. They would be standing up to racism and marching with young people in the streets to say Black Lives Matter. They would be calling for an end to war and to the abominable practice of torture, and instead caring for the environment and helping to create a sustainable future on earth.

How do we know they would be there, doing these things? Because we see the courage and resistance of so many people today, young and old, of every race and creed, standing up for justice, standing up for peace, standing up for the environment, for human dignity and for the common good. We see how the seed of their lives and witness that fell to earth and died continues to give hope in dark times.

May the witness of these brave women and the love they have sown be like a scattering of seeds, bearing fruit along the way and giving us a double portion of their spirit and courage for the challenges that lie ahead.

One thought on “Unless a Seed Die: On Hope in Dark Times”

There are about 150 Lent booklets left! Order now: